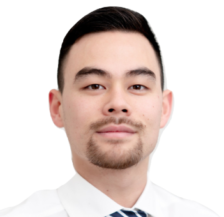 Dr Nicholas Lee is a dedicated and passionate Chiropractor who graduated from RMIT University with degrees in both Health Sciences and Applied Sciences in Chiropractic.

Nick also holds a Science degree from Monash University. He has a strong interest in musculoskeletal and neurological conditions affecting individuals of all ages and athletes.

Nicks journey to becoming a Doctor of Chiropractic Medicine took him from originally deciding between pursuing a career in either physiotherapy or medicine. Nick discovered Chiropractic during his second year of his Science degree at Monash university and immediately developed a strong interest for it.

Nick has a passion for learning and has attended a range of different seminars including Gonstead technique and SOT technique to improve his skills and further his knowledge of Chiropractic. Outside of work Nick enjoys travelling, playing indoor soccer, going for runs and spending time with friends and family. Nick’s spoken languages include English and basic Mandarin.

Nick is available for consultations on Monday, Wednesday and Friday in Narre Warren and Tuesday, Thursday and Saturday in Ringwood